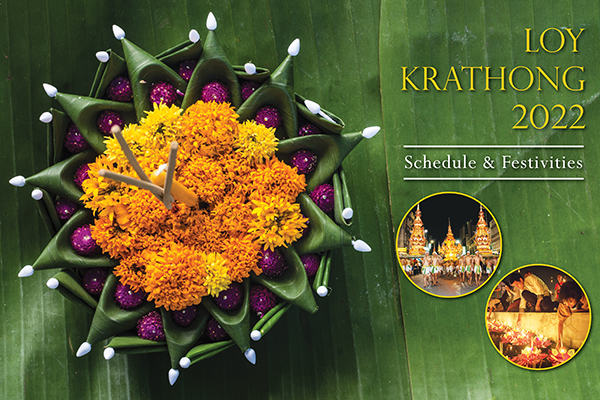 As the full moon lights up the night sky of November, throughout the city of Chiang Mai, hundreds of floats drift down the rivers and lanterns are seen everywhere. This is Loy Krathong and Yee Peng time, two famous events in Northern Thailand. 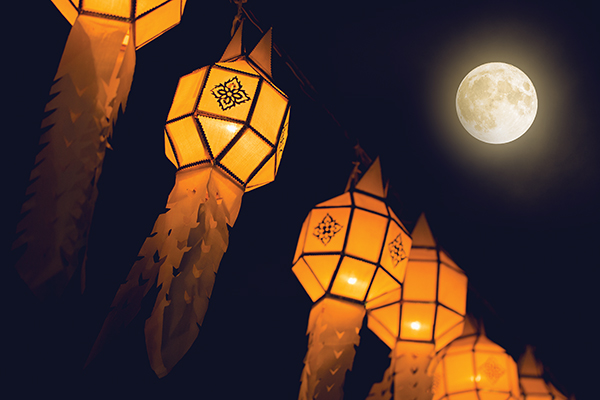 Loy Krathong festival is going to be very special this year: after two years of Covid’s restrictions we all missed watching the beautiful parade and joining together along Ping river. This year, this very romantic festival will take place from November 7-9th, 2022. 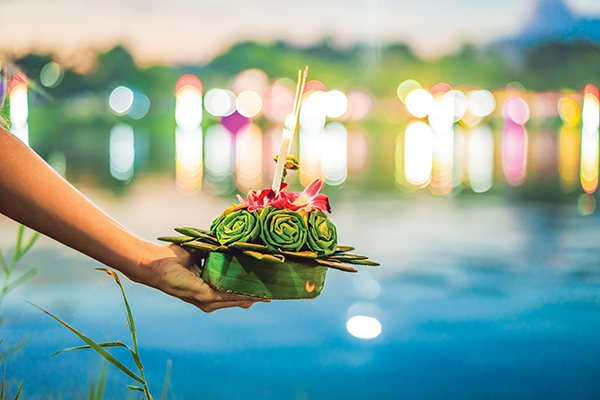 The celebration, known in Chiang Mai as Yee Peng, literally means the full moon of the second month. The festival features illuminated lanterns, which are either carried, displayed in houses and temples, and even launched into the night sky. 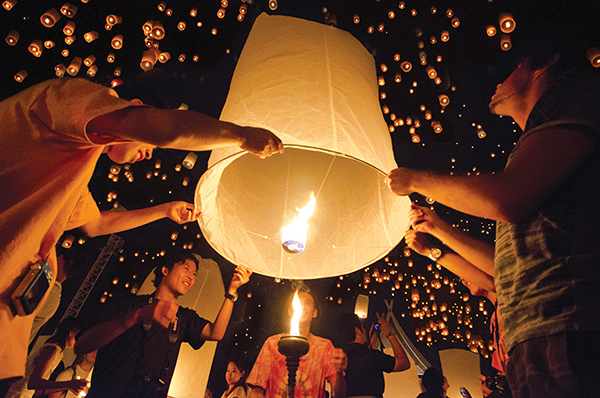 Apart from the lanterns celebrations, Chiang Mai also celebrates the floating festival. Krathongs are small decorated floats about 20 centimetres in diameter. Traditionally they are made from the leaves and trunk of the banana tree. The rafts are decorated with flowers, a candle and an incense stick. People often leave a small coin in their krathong, and occasionally they will place a lock of hair or even nail clippings. On the night of the full moon, people will light the candle and the joss stick, say a prayer, and float their krathong down the river. You will find plenty of these beautiful Krathongs for sale along rivers and klongs. Some are even made of bread, which will feed the fish in the water. If you happen to find beautiful floats made of foam, please do not buy them; let’s be good to our earth and mother-water! 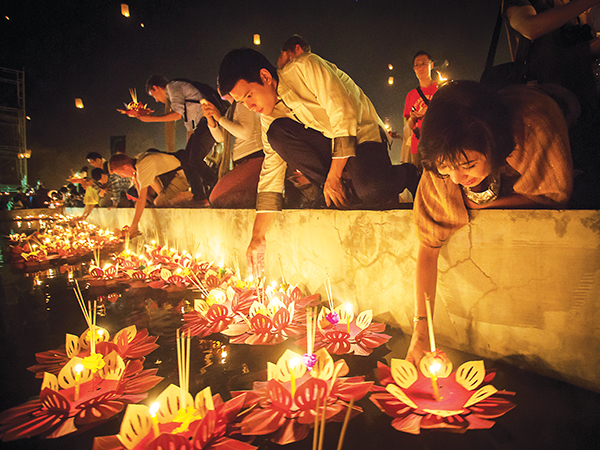 During the three days of the festival, the city of Chiang Mai is covered in lights. Interestingly, the city still uses candles to light the majority of the lanterns. Each evening university students light candles along the moat and at the Three Kings Monument. When night falls, the city is lit up with hundreds and hundreds of small candles. 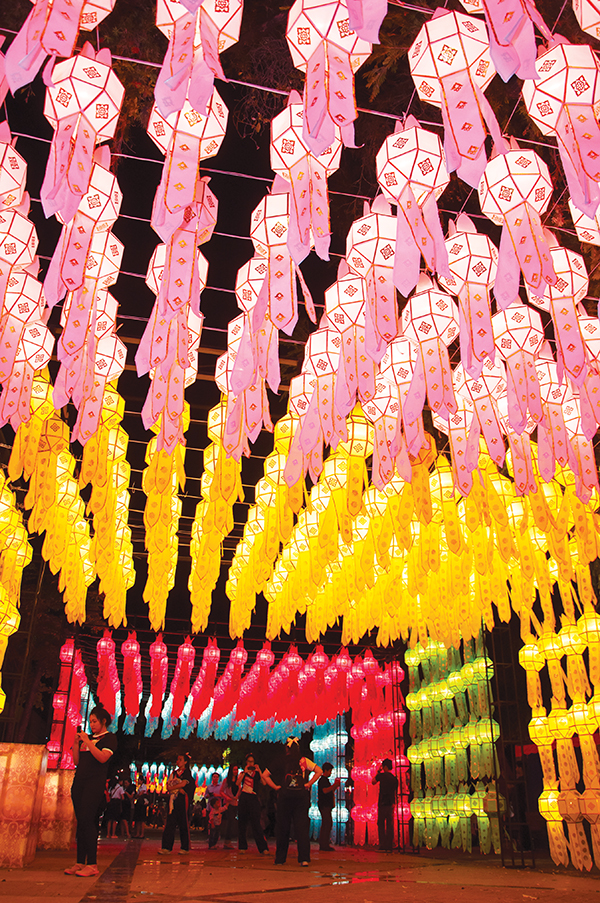 The Loy Krathong Festival in Chiang Mai also includes dazzling parades. On the night of 9 November, giant illuminated krathongs are paraded with candidates for the upcoming beauty contest perched on top. This parade is an enthralling spectacle for all ages. Starting around sunset, many groups line up in traditional costumes with bands of flutes and drums blasting away with fun and entertaining music. This parade features giant illuminated krathongs, on top of which are perched attractive candidates for the upcoming beauty contest. Everyone can view this parade for free by lining up along the main road and watch highly decorated floats as they pass by. The parade goes from Wat Thapae Gate to the Chiang Mai Provincial Municipality - passing through Thapae gate and Thapae Road. It starts around 6 pm. until late at night and finishes with a magnificent firework display over the Ping river. In addition to the previous schedule featuring the mesmerising Loy Krathong parade, there are some other very beautiful places and more quiet places where to go and witness this enchanting festival.

One of the more quiet and relaxing venues to float your krathong is the temple Wat Chai Mongkol, situated on Chareonprathet Road, along Ping River. This temple has a concrete landing on the river, where devotees can easily launch their krathongs. As it is in a temple, the celebration is much more spiritual and quieter for kids and elderly people. 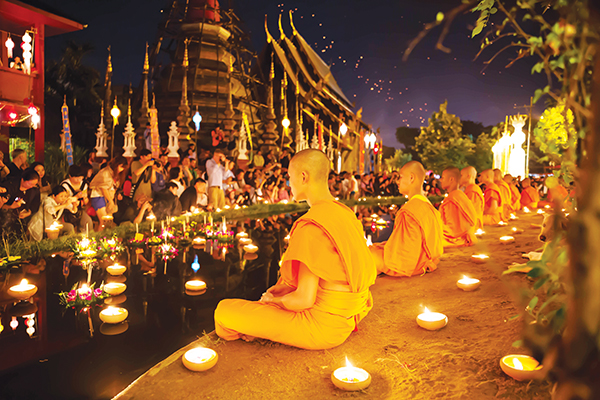 Another favorite place to go is Phan Thao temple, located in the old city, next to Chedi Luang temple. Each year this temple organizes one of the most stunning celebrations, and it is a favorite place for photographers.

Actually, each Loy Krathong’s event in Chiang Mai is unique and unforgettable. Check out the city’s schedule for year 2022 (see picture) and spend a magic moment each evening in Chiang Mai. 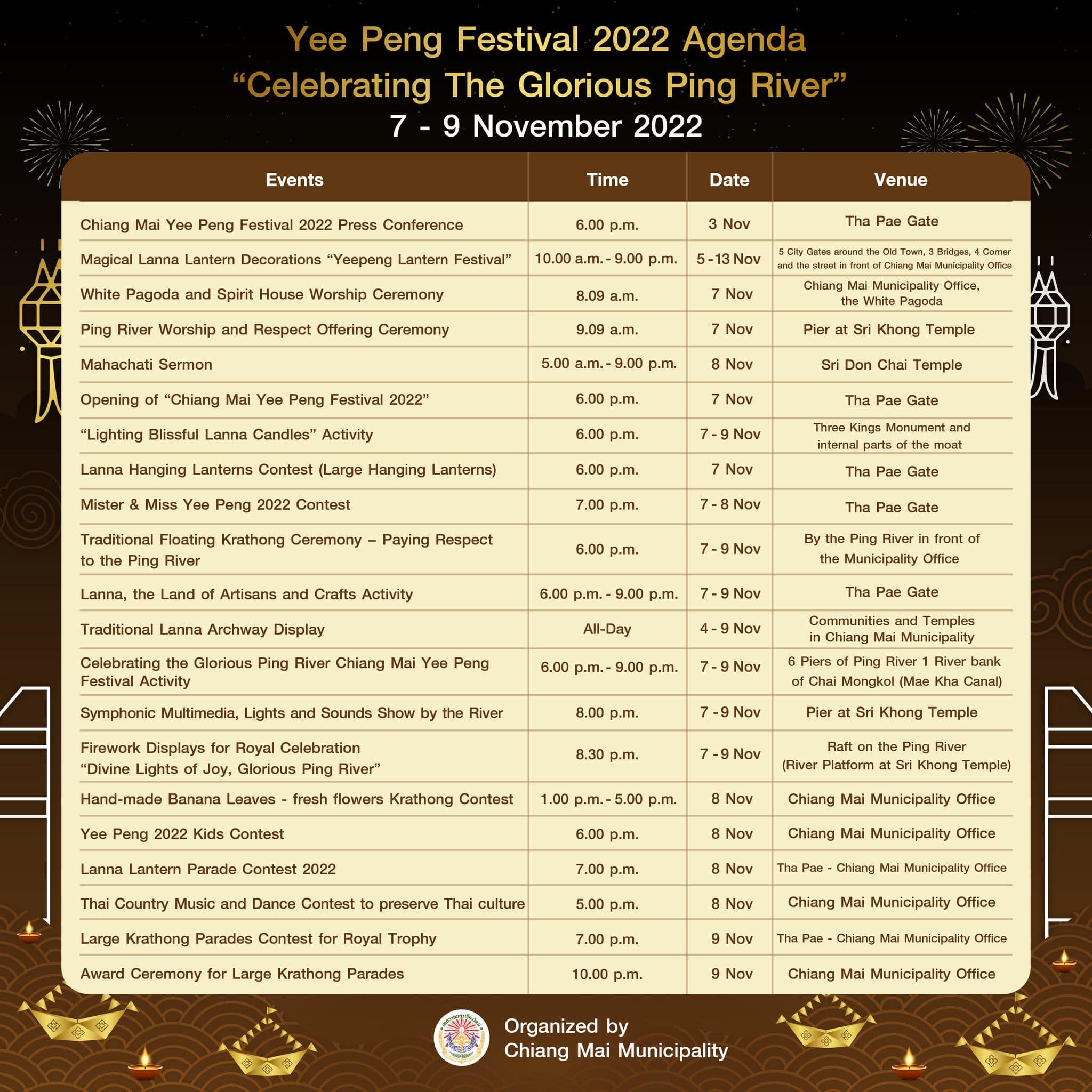 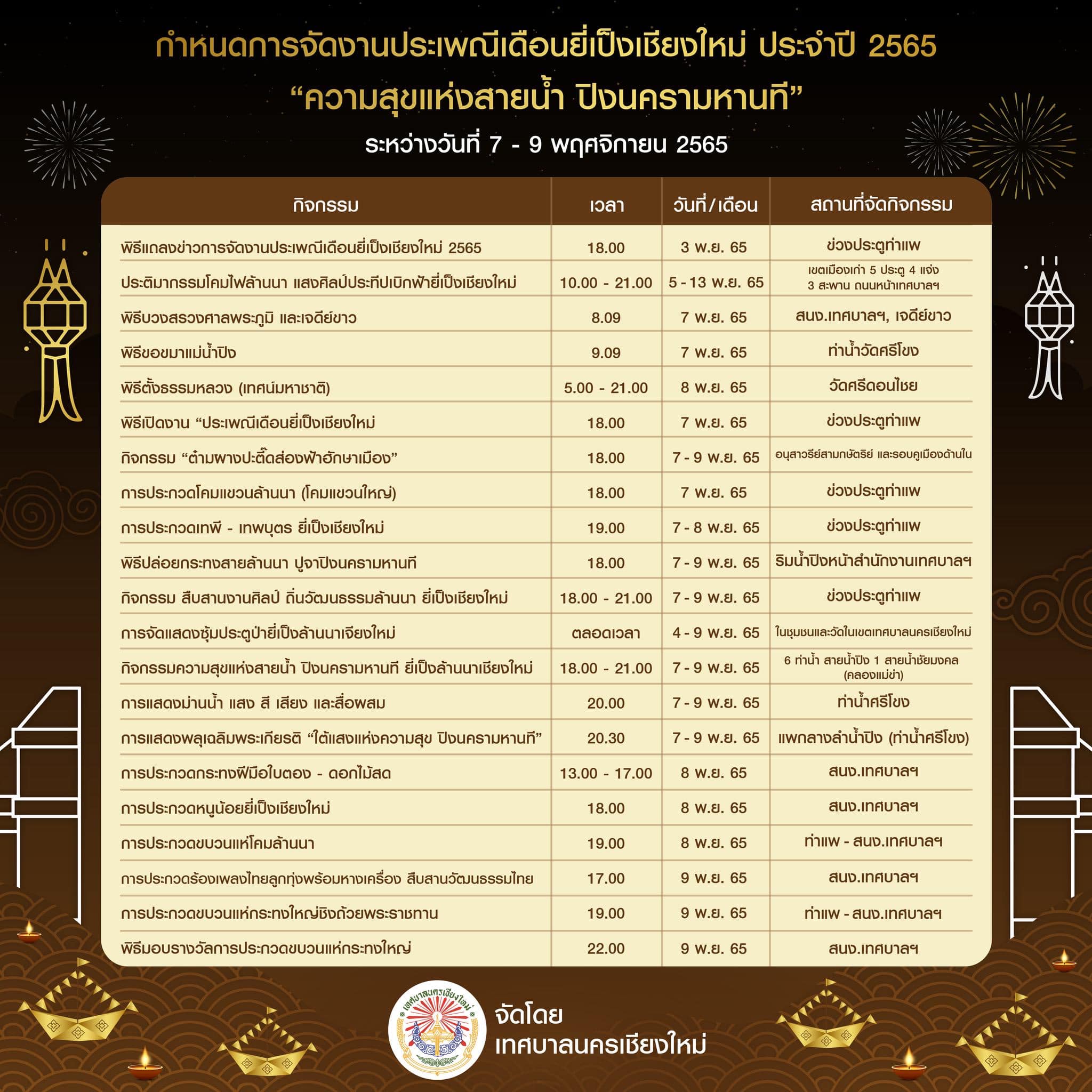 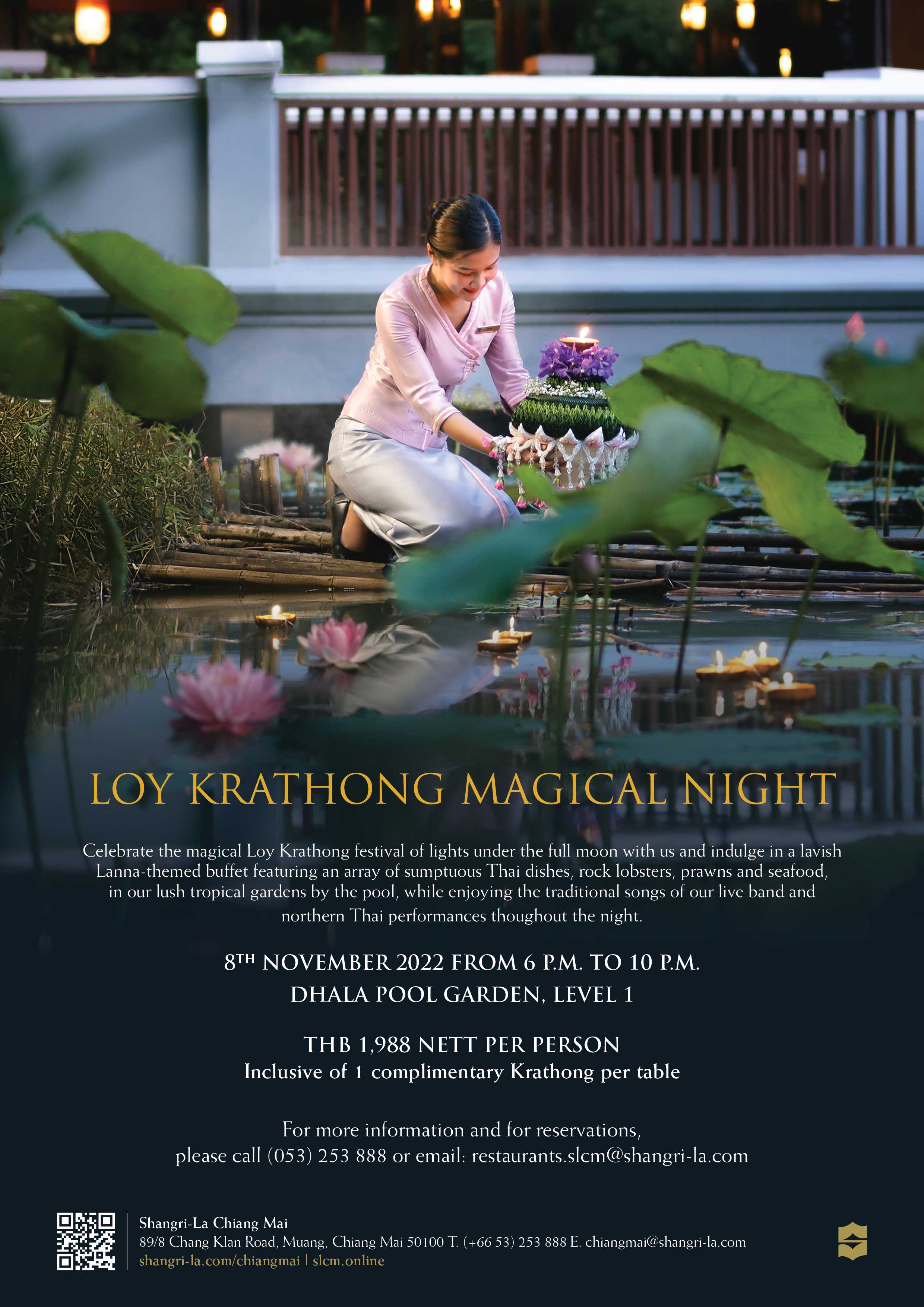 FOR MEN & WOMEN
The Miracle Spa

THE DUKE'S
The Duke's
SHOPS